IDEA Ops and LiveBeyond are conducting a research variety trial garden in Thomazeau, Haiti.  The purpose of the experiment is to determine which varieties of garden plants germinate, survive, produce, and seed the best under local conditions, what time of year is best to plant the different varieties, and which varieties are best suited to the local palate.  The experiment will last two years and is repeated every three months to obtain a thorough understanding of the seasons best suited for each plant.


The garden is delineated into four columns and eight rows creating thirty-two sections.  Each section is hoed into eight furrows.  The first furrow is planted with legumes (peas and beans), the second with a solanaceae (eggplants, tomatoes, and peppers), the third with onions, the fourth with root crops (beets, turnips, carrots, etc), the fifth with cucurbits (cucumbers, squash, melons, etc), the sixth with leafy greens (lettuce, arugula, basil, kale, etc), the seventh with another solanaceae (different from furrow two), and the eighth is a trench of compost.  This order is maintained for the majority of the garden but tapers off as varieties are repeated.  Every three months when the study is repeated the order of plants shifts down a furrow.  This practice of crop rotation ensures that the study will not be tainted by soil nutrient deficiencies or pest buildup.  Below is a chart of the current garden (as of September through December 2014): 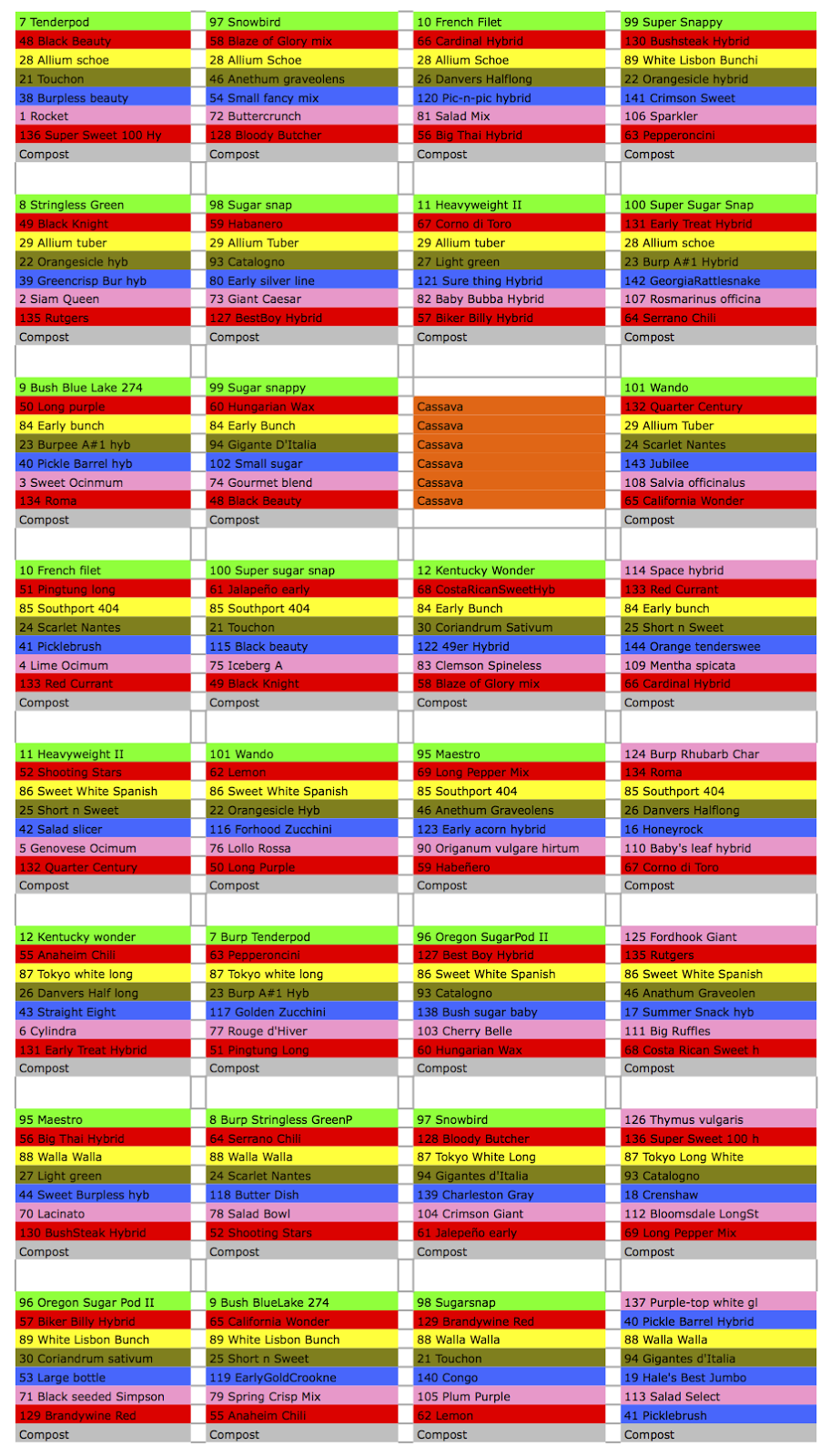 The purpose of the garden is not to produce a large quantity of fruits and vegetables with the intent of selling but instead to learn which plants will do best in this climate.  As the plants are harvested the produce is weighed and measured for quantitative cataloging and then prepared and served to a taste-test study sample to determine which varieties best fit the local palate.  The sample group is then questioned on each variety, (e.g. which variety do you prefer the taste of?  Which variety would you prefer to grow yourself?  Which variety would you purchase in the market?  What do you like about variety A?  What do you not like about variety A? Etc.).  All of the data is collected and compared over the course of the entire experiment.


The variety trial garden also doubles as a demonstration farm.  As the plants are grown and harvested the local farmers have the opportunity to see the success of failure of the different varieties for themselves without taking on any inherent risk.  As the best crops are selected, IDEA Ops and LiveBeyond can promote the adoption of the selected varieties with the assurance that the local farmers won’t be deciding on blind faith but with the knowledge of the experiment’s history.
Posted by Unknown at 8:59 AM No comments: