When I first moved to Haiti in 2010 I was taught a proverb in Haitian Creole which explained the nature of the residents of Thomazeau. "Le cabrit de Thomazeau á mem plem et mem plumage," which literally translates to "the goats of Thomazeau have the same skin and the same hair." What this figuratively means is that if you see some men from Thomazeau in a fight you should not get in between them as they are cousins and will soon make up. This weekend IDEA Ops travelled to Thomazeau, Haiti.  What I realized while surveying the actual goats of Thomazeau was that this phrase's literal meaning also implies that they are all inbred, which in fact they are.  The serious level of inbreeding has led to very poor quality goats, poor feed-to-growth conversion ratios, genetic deformities, high levels of abortion at all stages of pregnancy, and stunted growth rates. The goats of Thomazeau need a larger gene pool.
Partnering with Live Beyond, IDEA Ops surveyed the farmers throughout the area to determine their needs in raising goats. We collected excellent data though we found the farmers are in desperate need of education and herd improvement. IDEA Ops is currently in the process of writing a grant proposal to the USDA's Foreign Agriculture Service for goat genetic improvement through artificial insemination.
Partnering with Prairie View A&M University's International Goat Research Center and their director, Dr. Gary Newton, IDEA Ops is planning a program that will improve the genetic diversity of goats throughout Thomazeau through artificial insemination. The goals are to increase the economic stability, market accessibility, and nutritional availability of smallholder goat herders in Thomazeau, Haiti.  This will be accomplished through a participatory program that educates the herders on the basic principles of goat management, improves the overall herd health through artificial insemination, castration, and veterinary extension, and develops the infrastructure capacity of each participating member.  The stakeholders are impoverished, subsistence farmers. Their average herd size is a dozen goats and if they own land it is usually no larger than one hectare.  The residents of Thomazeau largely depend upon goat meat as their primary source of animal protein and since the goats never reach a truly marketable size and cost more to raise over an extended period of time the final expense to the consumer is higher than the low quality product should demand.  This results in serious malnutrition due to a lack of protein intake, a continuous cycle of poverty and food insecurity, and very few opportunities to expand their market.


By improving the education, methodology, and capacity of each goat farmer in Thomazeau, Haiti not only will the health of the goats improve but the financial security, educational levels, and health of every farmer and their families will increase drastically as well. IDEA Ops' mission is to "Relieve Oppression through Development." We recognize that the residents of Thomazeau are oppressed by poverty, poor health, and a lack of education and we are committed to working with the locals to see their levels of development improve. 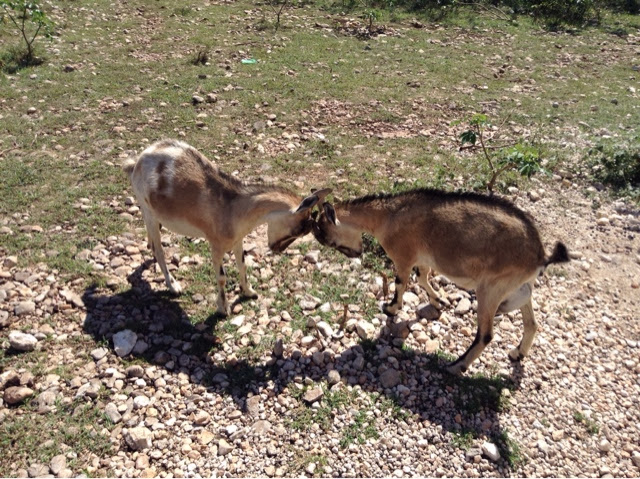 Posted by Unknown at 1:20 PM No comments: